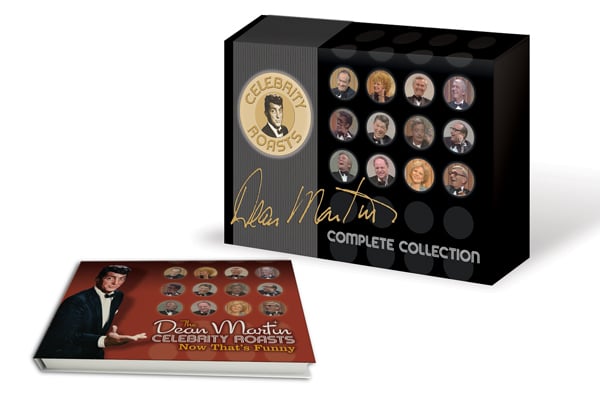 The Dean Martin Celebrity Roasts: Complete DVD Collection has been getting great reviews! Here are excerpts:

Originally only segments on the flagging Dean Martin Show, the Dean Martin Celebrity Roasts were so popular that NBC quickly signed Martin to a series of roasts. And the rest, as they say, was history. … And boy, is the humor ribald. It may surprise unfamiliar younger viewers just what Martin and his guests were able to get away with back in the feel good decade. . … The roasts are enormously entertaining and this DVD set is oodles of fun. – Screen Invasion

The Dean Martin Roasts: The Complete Collection is a great collection that has hours and hours of hilarious entertainment. … These shows are a bit bawdy, very politically incorrect, but mostly they’re just plain funny, even when viewed today. The set is also filled with extras. … There are 11 featurettes that were created for this set. … There are documentaries on the history of these specials, spotlights on some of the famous people to appear, behind-the-stage bits, and a look at how politically incorrect it was.

But Time-Life and StarVista went the extra mile and included a lot more. There are home movies of Dean Martin and his pals, many interviews with various stars, and bonus comedy sketches. In addition there are seven installments of The Dean Martin Show as well as two extra Dean Martin specials: Dean’s Place and Dean Martin’s Red Hot Scandals of 1926. The hours and hours of bonus content is a real treat. … It comes highly, highly recommended. – DVD Talk